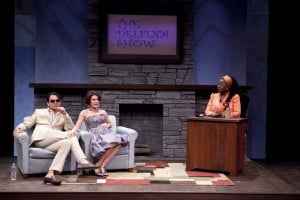 “Do not disappear off camera. Michael,” says talk show host Delfina. “Or none of this will have happened.”

Lives lived onscreen in their vivid, flickering unreality, are the subject of Don DeLillo’s probing 1999 play “Valparaiso,” running at the University Theatre through Nov. 6. In this portrait of a technology-saturated society, our collective greed for personal revelation by strangers is at once poignant and unsettling.

The play’s existential center is Michael Majeski, played with an easy arrogance by Santiago Sosa. An unexpected international detour on the way to Valparaiso, Ind. makes Michael the object of global curiosity. Like a Snooki or Kim Kardashian, Michael and his frantic wife Livia embrace the media frenzy with a hunger that matches the scores of viewers who line up to have Michael sign their airline passes.

Though the play takes several minutes to reach its stride, this is one of the strongest MFA projects I have seen in the past four years. The small cast, equal parts graduate actors and undergrads, is well-suited to the language and the style of the play, which feels even more contemporary than it is.

As Livia, Liz Cassarino hovers like a phantom at the side of the stage, spinning “demon repetitions” on her exercise bike. She’s intense without crossing into hysteria. Watching Cassarino is like looking directly into a bright light — she’s so desperate, so eager for attention.

Each interview is a battle as Michael tells his story again and again. Christopher Tiernen, disaffected and bored, presses Michael to “give me faster.” Glamorous blonde Kayla Mock plays a flirtatious reporter with “erotomaniacal” underthings; Karl Iglesias’ newsman is combative and clipped.

The second act is an episode of The Delfina Show, introduced by Teddy (Joe Lullo playing a slick Rod Roddy type) and hosted by jaki-terry as a kind of sadistic Oprah. Her line flubs are distracting, but jaki-terry is fascinating to watch. It’s like listening to Oprah’s interior monlogue as Delfina grows weary with the Majeskis’ cheerful reports of book deals and athletic sex.

“We’re not interested in that,” she says. “Speak … we deeply need to know.”

Clever and surprisingly subtle, “Valparaiso” first invites us to watch Michael and Livia become performances of themselves. Then Poulsen turns the cameras on us, implicating each viewer in the creation of every infuriating quasi-celebrity on the air.

If theater holds a mirror to society, this is a particularly smart, if embarrassing, snapshot.