Live theater is an experience that cannot be replicated. Each performance has its own nuances.  Every audience responds to what it is seeing a bit differently, and the actors respond in turn to this vibe.  And when the run is over, the actors roll up their figurative tent and move on — often to something totally different.  This impermanence is one of the things that makes theater so special.But there’s a downside as well.  Sometimes you see a performance that is so special, so creative, so magical, that you want to watch it over and over.  But you can’t just hit the “play” button again.   The performance lives on only in your mind.

I came away from Wednesdays’s WorldFest line-up having seen two shows that made me feel both grateful that I was there to have the experience yet regretful that it was so fleeting.  Interestingly, both shows used music throughout, but the experiences were radically different…

The second performance that grabbed me and has yet to let go was “POP!”presented by the Danish Black Box Pangea.  When I was working on my article about the Festival, I skyped with the group’s Emilie Bendix (who is a returning participant) to hear about what she had planned for this year.  She explained that they would be doing a “theater concert,” a style of theater that is popular in Europe that hasn’t yet migrated to the United States.  She said the purpose was to make the audience focus on the lyrics of popular songs.   I couldn’t quite imagine how they were going to do this, but it sounded interesting. 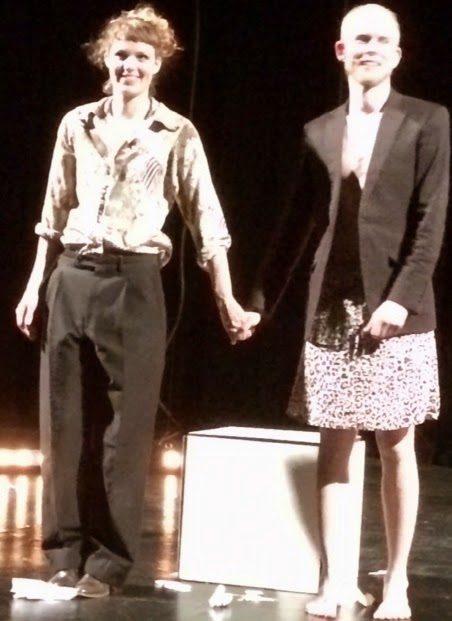 The songs included Christina Perri’s “I Am Human,” Pharell Williams’ “Happy,” and Fun’s “We Are Young.” But having a sense of what lyrics were included is almost meaningless.   Sometimes they sang but often they spoke the words, forcing you to really hear what was being said. They used intonations and timing that made the words their own. They threw–and ate–paper hearts.  They played guitar and keyboard. They manipulated the lights. They came into the audience.  They switched clothing. They shared feelings of love and loss and pain and vulnerability. Ultimately, they defied any expectations I had about what my evening was going to hold.  The performance closed with Rasmus Rhode standing on a far side of the stage atop a box wearing Emilie’s dress and his jacket and singing “Say something, I’m giving up on you” (from A Great Big World) in a haunting voice.  This moment in particular left me breathless.

“POP!” was edgy and made me simultaneously feel uncomfortable and exhilarated.  It was incredibly powerful.  I left the theater hoping this is the type of performance I’ll be able to see when I go to the Edinburgh Fringe Festival later this summer.

Thank you to Venice Theatre for bringing these amazing performances to the WorldFest stage.  And there’s still more to come!  I can’t wait.